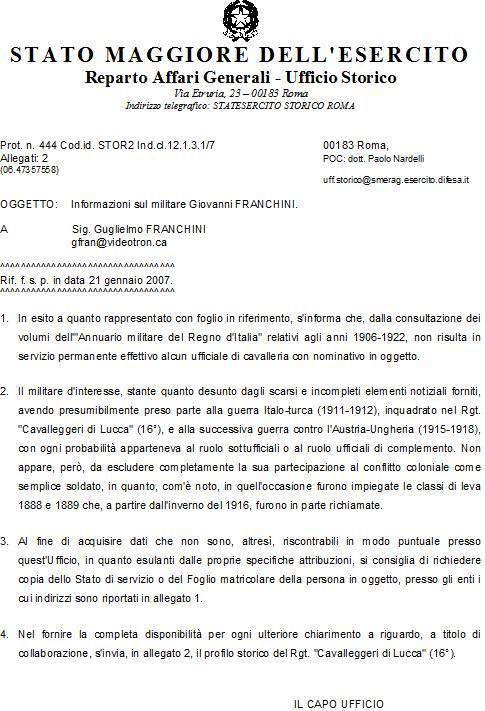 As mentioned previously, my husband is researching his Franchini grandfather’s Italian military service in the early twentieth century. What follows is his English translation of some information he received from the Historical Section of Italy’s Stato Maggiore Dell’Esercito.

1.       As a result (of research) on what is shown on the (above) reference sheet, we inform you that,  after having consulted the volumes of the “Military Yearbook of the Kingdom of Italy” concerning the years 1906-1922, there was no cavalry officer  of such a name in permanent (career) service.

2.       The soldier in question, based on the scarce information provided and allegedly having served in the Turkish-Italian war (1911-1912) and in the war against Austria-Hungary (1915-1918), was most likely a non-commissioned officer or a  reserve officer. We cannot, however exclude completely (the possibility of) his participation in the colonial conflict as a simple private since, as it is known,  the classes *(draft) of 1988 and 1989 were used that occasion and were (also) recalled during the winter of 1916 (for the 1915-1918 conflict)

3.       In order to acquire (further) information not readily available from this office falling outside our specific mandate. We suggest you request a copy of the Record of Service and of the Release certificate from the institutions listed in annex

4.       In order to provide further information we enclosed a brief history of  the Lucca Light Cavalry regiment (16th )